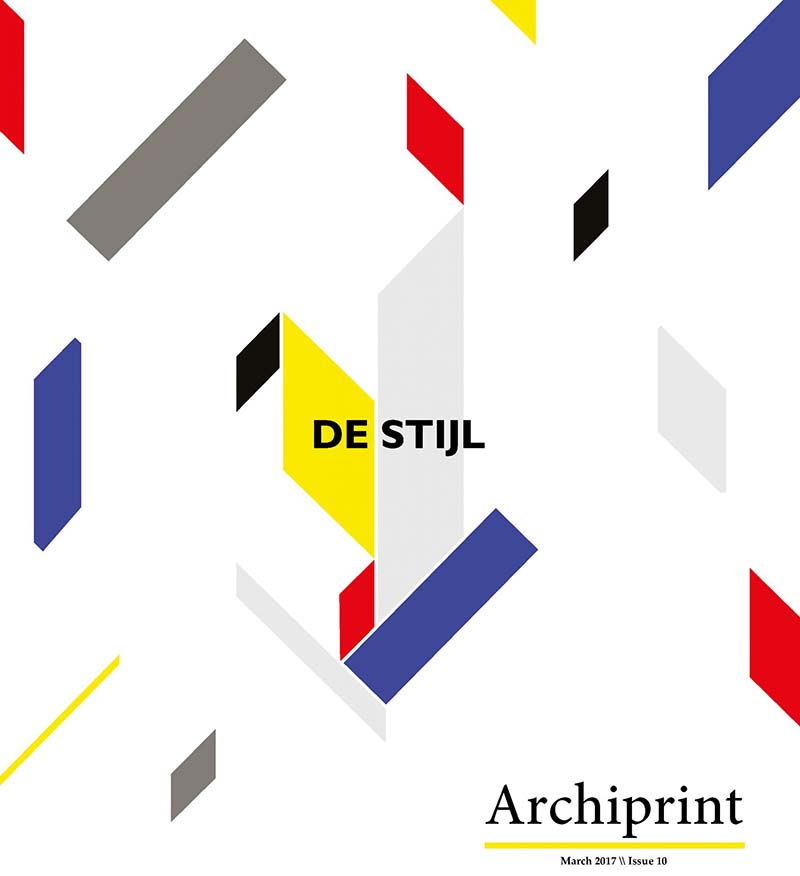 In 2017, it is a hundred years since architect and critic Theo van Doesburg founded the magazine De Stijl, leading to major changes in Dutch art, architecture and perhaps even society in general. This anniversary will be celebrated throughout the Netherlands in many ways: in exhibitions, lectures and publications. Celebrating its own anniversary, Archiprint decided to connect to these festivities and devote its tenth issue entirely to the famous movement.

It is difficult to stand out among the large number of organized events and the De Stijl fever that seems to accompany them, including De Stijl wallpaper in trains and beer commercials in Mondrian patterns. This edition, however, is exceptional in two ways. First, being an architecture journal, it focuses on architecture in particular, instead of art in general. With the exception of the designs by Rietveld, it is mostly the paintings of Van Doesburg and Mondrian that dominate the c urrent exhibitions, while Van Doesburg’s influence on architectural theory and the designs of, for example, Oud, Wils, Van ’t Hoff and Van Eesteren have so far been less exposed. Secondly, it provides a well-founded background to understand the movement in general, instead of merely adding new discoveries and perspectives.Especially the younger generation might find it difficult to understand what De Stijl meant for architecture, if such a background is missing.
The order of articles is composed in such a way that the issue starts with articles providing this background and gradually moves towards articles on more specific aspects or projects at the end. First, Bernard Colenbrander provides a general introduction, in which the articles’ subjects are described in their historical context.
This is supplemented by the second article, in which the biographies of the De Stijl contributors are discussed. Subsequently, Van Doesburg’s influence on architectural
theory is explored by Henk Engel.

To provide further insight into the way De Stijl promoted ideas through its magazine, the next article concerns the reprint of (and commentary on) an essay by J.J.P. Oud in the fi rst issue of 1917, and a cautious comparison between Oud’s theories and those of another avant-garde movement, that of Italian Futurism. The work of Jan Wils is exposed in the subsequent photo essay, in which his design for the Papaverhof is displayed in its current state.

Van Doesburg’s correspondence with the organization of the Dutch Pavilion at the World Exposition in Paris formed the main source for the essay by Stephan Petermann, which illustrates Van Doesburg’s personality in a captivating way. After that, an article by Luca di Lorenzo sheds some light on the origin and impact of the axonometric drawing, which played an important role in the architectural designs of De Stijl. And finally, Mick Eekhout provides some interesting insights in his experiments on the reconstruction of a classic De Stijl design by Van Doesburg and Van Eesteren: the Maison d’Artiste.

The aim of the collection of articles is not only to provide a history of this peculiar movement, but also to show the major influence it has had on architectural culture,
and how architects might still learn from it, even after a century.