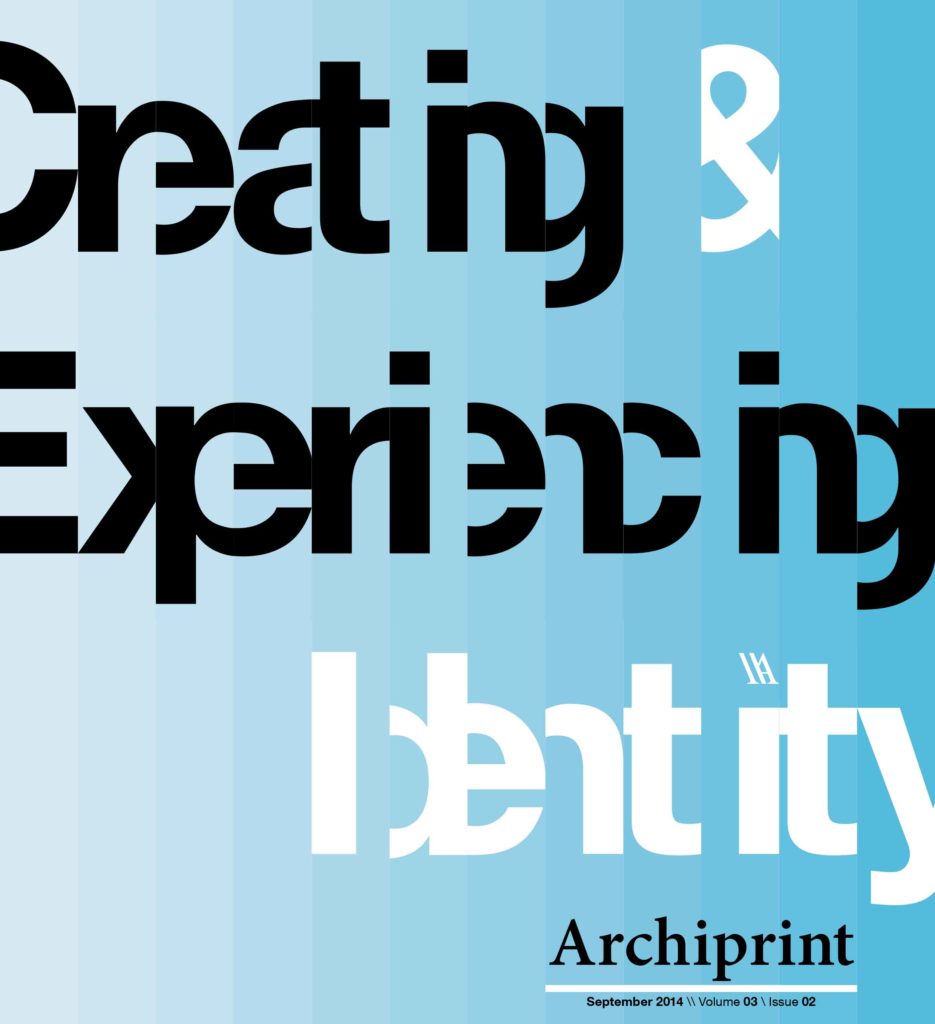 Identity may seem as a wide, generic and somewhat unoriginal theme for a publication like Archiprint which, for the most part, aims
to strike up a conversation with students and young professionals. Quite to the contrary, it has been an extraordinarily inspiring theme right from the conception that has both stimulated and sustained critical discussions. Through the curatorial process, the editorial board steadily developed a point of view on the issue that we believe is multidimensional, relevant and architecturally contemporary. This editorial elaborates our argument for and against identity as a central notion in architecture, supported by the rich and diverse opinions on the topic we have had the opportunity to bring together in the issue. We will also situate the individual opinions expressed in each article in a broader discussion presenting the argument of the editorial board. The previous issue of Archiprint inquired into Movements in Architecture that traced recent changes in practice and perception of architecture. It successfully captured a cross-section of contemporary movements or trends from sustainability to parametric design. Understandably, we were still reflecting on questions raised in that issue while pondering on potential themes for this issue. Looking back, a desire to find common ground in current architectural practice that seemed to traverse a very wide spectrum could have steered us towards a blanket theme like ‘Identity’. However, we did not foresee the extent to which the topic has really served that purpose. Scaffolds [page 6], a new attempt from Archiprint, assigned every member of the editorial board with the task of finding a personal point of view within Identity. The very useful exercise that we hope to continue in future editions, reiterated the tremendous scope of the theme, but it also emphatically demonstrated the common ground these starkly different, far-reaching observations – on art, architecture, the urban organism – share, proving the relevance of enquiring into such a blanket theme.

The double-edged sword
Within the theoretical framework of this issue, Identity has emerged as a strong and critical notion in both the creation (in other words, creating an identity) and the experience of architecture (in other words, identifying with architecture). In creation, the creator or the architect asserts his identity on the created object or architecture. There is a will to assertively claim space by filling architecture with a distinct meaning and identity that is irrevocably tied to that of the creator or the creative agency. Some architecture is also subject to a will to sustain in time, others naturally tend to persist. In both cases, architecture that does persist becomes the collective expression of a culture, context or function. The architectural identity invoked in the act of creation and sustained in time may be referred to as Sustained Identity which becomes a frame of reference for any new architectural intervention. It is continuously evolving, is largely further attested and perpetuated, often interpreted, and sometimes challenged in the process of making architecture.

Interestingly, experience of the architecture thus created also has an identity quotient, which operates on a much smaller scale – on that of an individual or a concentrated group. An individual’s (or a collective group of users’) identity significantly alters how architecture is perceived and more importantly used. Architecture enters into a dialogue instantaneously and contextually with each individual and depending on his experience and assumes an identity that is subjective and temporary. Julie Bosch, in her article [page 34], poignantly portrays the many worlds inside tediously similar row houses. The worlds created within these walls are unique for each inhabitant, different for father and son, for the length of his habitation. Each Experienced Identity is unique but is important because it affects the collective or Sustained Identity in the course of time.

Identity thus is a volatile concept that strongly operates on two extremes of architectural production and in different capacities. Identity creation is both instantaneous and sustained. It simultaneously emerges and eventually dissolves with the perceiver and condition of discernment but also betrays a desire to sustain in posterity.