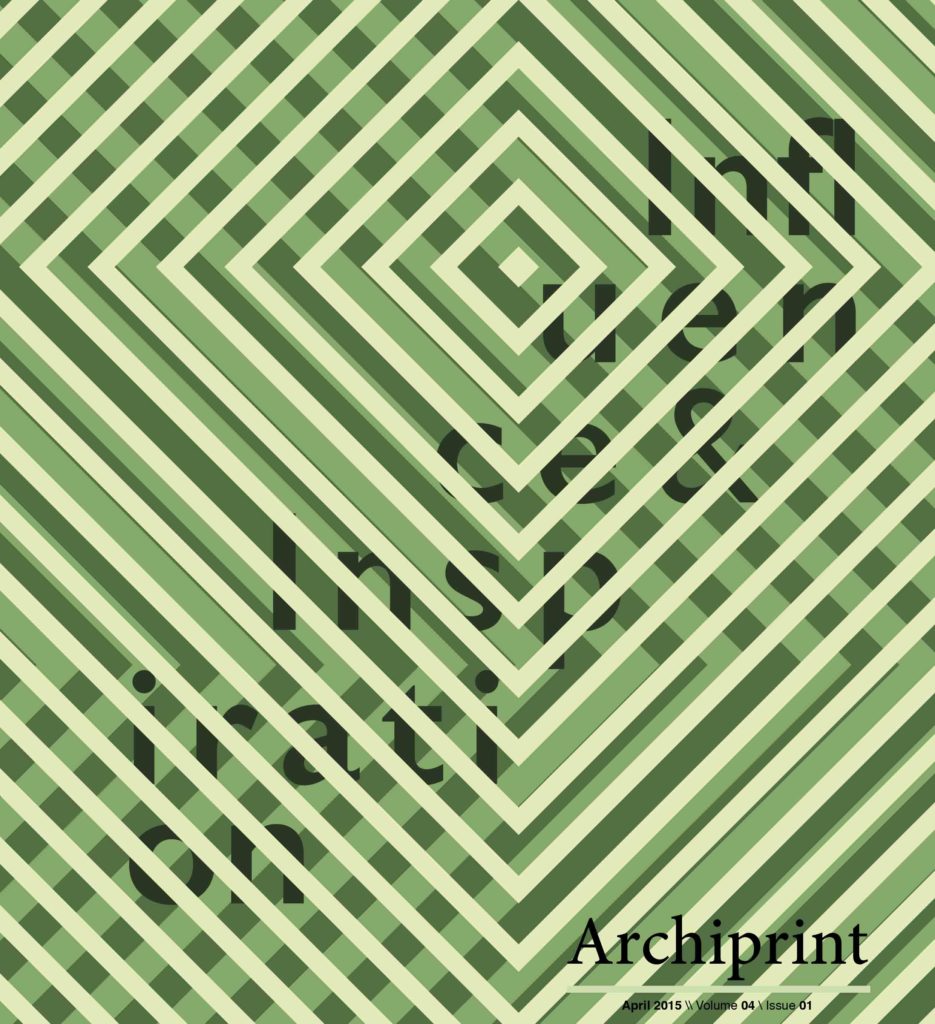 To what extent can a title be self-evident? This seventh issue of Archiprint goes under the name ‘Influence & Inspiration’, which at first may seem rather remarkable to serve as a singular theme. Yes, it consists of two words. And yes, both phenomena are so relevant to architecture as a discipline that they could possibly be approached individually, and suffice as themes for two separate issues. In that context, this issue’s title may actually require some explanation.

Let us first recognize that we are not in any sense denying the singularity of both phenomena. In fact, they are substantially different. However, even when we briefly allow ourselves to omit any level of nuance in our perception, and consider the Oxford dictionary as an absolute truth, we have to admit to the evident interference of both phenomena. Influence is described as ‘the capacity to have an effect’, whereas inspiration is characterized as ‘the process of being mentally stimulated’. In other words, the one cannot practice its quintessential nature without the existence of the other. Joined, they become so compelling that our editorial team chose to perceive, approach and elaborate the theme as a twoword totality.

This could induce the impression that the dilemma of influence and inspiration in architecture is the most elementary issue this journal has ever devoted itself to. John Locke (1632-1704) once said about nature: ‘I conclude that there is no thing constantly observable in nature, which will not always bring some light with it, and lead us farther into the knowledge of her ways of working.’ The same applies to architecture; a work of architecture that is not the product of influence or inspiration in any kind whatsoever is very unlikely to exist, and as unlikely to ever be achieved. Professionally, we are influenced and inspired every single day. Deliberately and out of free will, or even by compulsion and unconsciously. Consider it as the course of an architect’s everyday life. The chicken and the egg, so to speak. It’s an infinite loop. Something that happens to all of us. A vicious circle embedded so deeply in the very heart of our discipline that it constitutes a permeating and essential factor in the viability and progression of architecture.

So in fact, this issue may be the most ambitious of all of our past inquiries. How do you approach the notion of such an allencompassing theme? How do you grasp something that has to do so much, with so much? And the question most relevant to this journal’s pursuit of a literary constructive and objective contribution to the controversy: How can this theme successfully be addressed without the issue becoming a mere collection of utterly arbitrary articles?

We began with something close to our hearts: the current changes in Dutch regulations that aim to exacerbate the requirements for eligibility to use the preserved title of architect. From 2015 onwards, graduated students of architecture have to complete an additional two year programme under the supervision of a registered architect in order to apply for the official title. More than ever, a critical awareness prevails among students, regarding the influence that all master-apprentice principles entrenched in our educational system have on inspiring the new generation. We discussed this issue with Barbara Kuit and Mark Hemel, who have both worked for architectural ‘masterminds’ and contributed to education at institutes for architecture around the world. They argue that in general, ‘friction’ during the design processes is key to being sufficiently influenced and effectively inspired, and the masterapprentice orientated structure of architecture should facilitate this friction. For Dekkers, friction lies in the general aim towards a balance between ratio and intuition, which merely results in what she describes as ‘poetic engineering’ – a method that considers buildings as the accomplished influences deriving from a certain location, and coherent to that the inspiration at a specific moment in time. It is no secret that architecture is not an autonomous discipline. The notion of time as a general phenomenon and all its adverse effects have clearly been recurring throughout the entire theme. To what extent could influence and inspiration over time be univocally operating phenomena? And if they cannot – if the ways we are influenced and inspired as creative individuals change over time – then what does that say about the qualities we claim that architecture possesses? Max van der Westerlaken provides an unambiguous statement in his essay ‘Persistence and Flux’; there is no one accurate answer. Using theories by Semper, Von Meiss and the latest Venice Biennale curated by Koolhaas, Van der Westerlaken examines the influence of the digital era on architecture, and concludes that the physical elements our buildings consist of allow change over time, yet that in a most general sense our profession consists of a constant set of principles.

However, despite this infinitely fixed set of principles, it does seem that occurrences in time on a more fundamental level contribute to the way we are susceptive to actually being influenced and inspired. This is illustrated by Omayra Mingels when she uses today’s prevailing limited architectural career possibilities to identify the professional behaviour of post-economic-recession graduated architects, of which she herself is one. An event that ‘provokes and activates an extraordinary new input for creativity’, so she argues.

All of the viewpoints so far have in common their dependence on knowledge and awareness as key elements for being influenced and inspired, and it seems plausible that they are somewhat related. Anneke Vervoort attempted to designate the actual value of knowledge in the process of being influenced, by means of awareness. She organized a 24-hour design experiment with no other objective than that of an end product without restrictions. Remarkably, the lack of influence incorporated in the brief transformed into a general influence on the participants, and became a source of inspiration itself. Vervoort’s reportage of the course of the experiment shows the strength of ignorance opposed to knowledge. But Vervoort is not the only one with legitimate concerns about the dependence of influence and inspiration on knowledge. By addressing the common misinterpretations of theories by mid-nineteenth-century Italian architecture historian Manfredo Tafuri, van Bergeijk critiques – almost in the shape of a manifesto – our ways of incorporating history, and translating it into specific but doubtful knowledge and awareness. Nearly counter to Vervoort’s inquiry into a level of restricted ignorance, van Bergeijk questions the frequent desire among architects to use historical theories as a kind of all-embracing source of inspiration or even as a means of influence.

Awareness thus becomes the more appropriate answer, if there even is one. In the interview with Chris van Duijn of the Office for Metropolitan Architecture (OMA), this is clearly empathized. Generally, van Duijn argues that for OMA: ‘Only the methods of our design and research processes can be considered generic,’ and clearly OMA has excelled in these research processes to gain influence and inspiration by the establishment of their counterpart AMO.

Basically, what influence and inspiration means – whether in architecture or in general – cannot be self-evident. It cannot have an obvious answer. This issue of Archiprint attempts to internalize these phenomena within the discipline of architecture. It is awareness of the phenomenon that can change it from an unobtrusive event into a notable and crucial contribution to a future of better architecture.