Archiprint 9 – The Architecture of Design 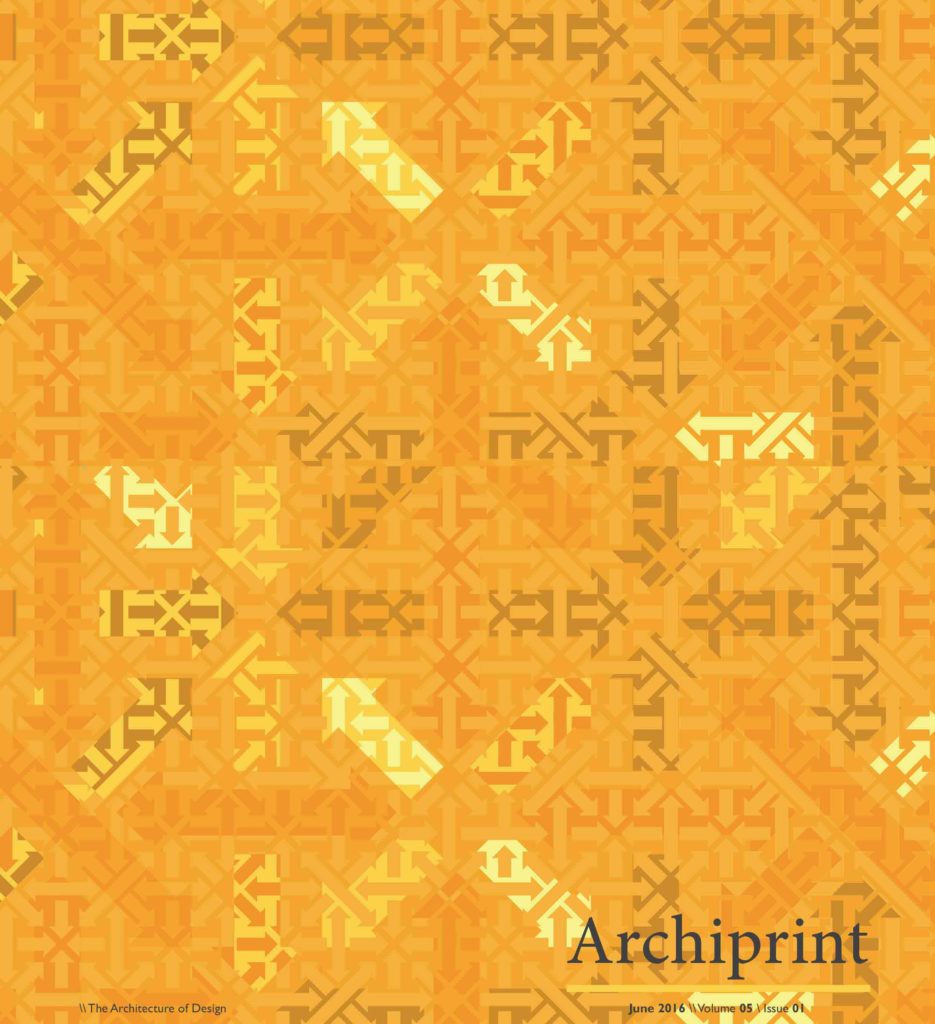 ‘When designers – especially skilled, successful designers – talk spontaneously about what they do, they talk almost exclusively about the outcomes, not the activities. They talk about the products of their designing, rather than the process.’1

In this statement, Nigel Cross observes something peculiar about the design discipline, that can be experienced in both the professional field of architecture and architectural education. Discussions seem to focus on the design itself, but the question of how architects came up with their ideas often remains unanswered. Even in cases where architects present their design process, such as in the lecture series Making Architecture,2 they often present a sequence of diagrams that show how an idea is translated into a building, not how the idea itself came into being. The way of thinking is evaluated through its results, and most often the diagrams show a less complex process than what the initial design activity must have been like. In some cases, ‘designers can even seem to be wilfully obscure about how they work, and where their ideas come from’.3 As an example, Cross explains how the renowned designer Philippe Starck claims that his ideas are spontaneous. His design for a lemon squeezer, like so many of his designs, just appeared to him, in a seemingly magical way.

The avoidance of discussing design activity can be traced in architectural education as well. Even though designing is one of the core activities of future architects, courses rarely provide strategies for designing. More often they offer tools that can help during the process, such as technical knowledge, drawing techniques or exemplary cases of urban and architectural design. Other than that, project work is clearly aimed at learning how to design. But here too, designing is considered to be a skill that can be acquired by trial and error, not a form of knowledge that needs to be taught by the theories of others, and during tutoring sessions the focus is often on what students have designed, not on how they designed it.

Is this justified? I think partly it is. After all, our goal in designing is not to have a good design process, but to arrive at a good design. Besides, designing seems to be something so complex that it might be easier to evaluate its results, rather than to try to explore each and every aspect of the process. And perhaps this process is so personal that communicating about it is found to be rather difficult. However, it could be useful to at least try to get an idea of what designing encompasses and fortunately, there are different ways to do so. As Cross shows, the process of Philippe Starck designing the lemon squeezer can to some extent be reconstructed from the sketches he made, and observing architects at work or interviewing them can be useful sources as well. In fact, as Archiprint decided to devote its ninth issue to the topic, it became clear that much more research is done than we initially expected.

As we discussed the issue within the editorial board, different members could recall moments in which tutors actually did give an idea on the process of designing, by drawing diagrams that represented the phases one has to go through. Soon a collection of thoughts on the structure of the design process, propagated by several tutors, was composed. Another attempt at didactically describing design activity can be found in Design and Analysis by Bernard Leupen and his co-authors.4 In this book, the writers provide insights into what they think the process encompasses, and connect this to the work of analysing architecture.

On a more scientific level, there appears to be a research field called Design Thinking, of which Cross is one of the prominent researchers. In this field, the focus is on design-specific cognitive activities, which means research is done into ways of thinking during designing. In general it seems the topic receives more attention in the industrial design discipline than in architecture, but as Michael Arbib shows in his essay ‘Toward a Neuroscience of the Design Process’, the latest findings in neuroscience can provide insights into the work of a designing architect as well.4

As already becomes clear from the range of literature that can be found on the topic, there are different levels at which one can speak of a design process. While neuroscientists are interested in the most elementary forms of processes that can be found in the brain, our ‘normal’ understanding of design activity concerns more strategic steps such as the analysis of the problem or the collection of different ideas. The selection of articles in this issue therefore encompasses variating perspectives on the topic. With articles ranging from research into brain activity to abstract models of design processes, and from interviews with practitioners to the written word of scientists, we hope to give a somewhat complete picture of what is known about design activity today.

To start off, Bernard Leupen contrasts two visions on how design ideas are conceived. He claims that, on the one hand, designs are based on the examination of other works of architecture. On the other, we need a certain intuitive aspect to complement it. Leupen then shows how these two ways of thinking are both used by prominent architecture offices.

‘A Machine for Designing’ encompasses a report of a discussion held by The Philosophical Table Club. To understand what the club’s members believe to be the fundamental nature of human-design activity, they virtually created a design-robot, by thinking about what properties this robot should have. The report forms a useful exploration of the overall subject, and shows how close the ability to design is to being human.

This intertwining of design ability and human nature is further explored by Daan Jenniskens and Jasper Brus, who try to find out what an evolutionary understanding of heritable traits can teach us about the origin and development of our mental ability to design buildings. In doing so, they question our common understanding of designing and show the important role of imitation.
In ‘Imitation and Innovation’, Jacob Voorthuis expands this theme and shows how a continuity between the concepts of imitation and innovation is essential to being able to design. By doing this, he puts in perspective the disapproval of imitation and the great value that is being attached to innovation nowadays.

The centre of this issue is formed by an intermezzo, which shows a collection of ten diagrams drawn by tutors of different architecture schools in the Netherlands. Putting these perspectives together makes it possible to compare them, and although some universal elements can be found, it seems the idea of a good design process takes many different forms.

To get an idea of how these schematic design processes work in the industrial design discipline, Archiprint interviewed design critic Lucas Verweij. In this article he claims prescribed design processes as they are often presented do not lead to good designs, as they ignore the much more complex and chaotic way in which designing actually takes place.

Another perspective from the practitioners’ side is presented in a conversation with MVRDV architect Klaas Hofman, where it becomes clear how the office uses representations of the design process to structure its own ideas, communicate them to the clients and sell them to the public. The emphasis on collaboration of rationality in the form of Big Data and intuitive decision-making based on these data, lightly connects the interview with the ideas of Leupen and Verweij.

To close off the range of articles, Nigel Cross presents the most important research that has been done in the field of design thinking throughout the twentieth century and over the last decades. He shows what influence brain damage can have on the design process, and what this tells us about how we design. As in the previous articles, Cross proves that design ability is something inextricably human, embedded in our brains as a natural cognitive function.

Interestingly enough, there is a great variety of connections that can be drawn between the articles, although the subject is reviewed by different writers from different disciplines. It shows there is a certain consensus on which themes play an important role in design activity. The fundamental role of studying the existing environment, the difficulty of representing a complex and creative process and the observation that designing is an essential human feature are good examples of this. So although the process of designing is still far from being unravelled, the discoveries in this issue will bring you at least one step closer.